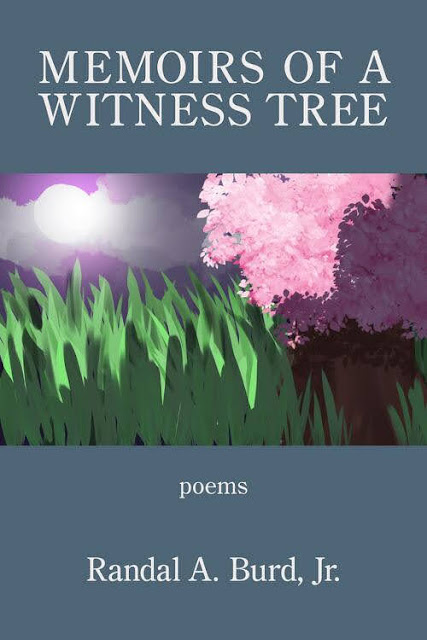 Some poets prefer to write in metaphor and hide poetry's real meaning by abstract description, allusion, and imagery that only hints at the real meaning. Others prefer to be more concrete. The meaning is conveyed through the simple description with no hidden theme. With his book of poems, Memoirs of a Witness Tree, Randal A. Burd Jr. is the latter.

Burd's poems paint verbal pictures through words and form. He captures various subjects such as youth, love, friendship, emotion, aging, and death in ways that even Readers who aren't regular poetry lovers will read and understand. These are experiences that many can relate to and follow.

Burd is fond of using the sonnet form. Various poems in this book are sonnets. The first poem, "Humblest Apologies" hilariously warns the Reader about the "archaic paradigm." The Speaker is afraid that the Readers may think that he is boastful or cliched by retreating to the popular form used by Shakespeare and Spenser. The Speaker however prefers to write his poems his own way and hilariously warns the Reader "And thus with ample warning, pray begin/To reassess conventionality."

While Burd often uses the sonnet form, the emotions captured in the poems are so great that the Reader is unaware of the form that is used. The description and imagery take hold. In "Prematurely Blessed", this is particularly noticeable. In this poem, the Speaker is delighted about the birth of his daughter, but anguished about her premature birth and frail body. "Untimely from her mother's womb was hurled/Our premature and sickly sacred prize/Who, we would later come to realize/Became the star 'round which our planet whirled/Her sickliness received intensive care/Pneumonia left her lungs and let her thrive/So lucky and blessed to be alive/Our lives were changed forever then and there." Through his words, Burd captured the bittersweetness when a child is born, but is ill and may not live long.

Many of Burd's poems are filled with nostalgia and a longing for the past. The poem "Overthrown," features the Speaker driving through his hometown and seeing the woods where he and his friends used to play Robin Hood and other games. Burd wrote, "The paths we have made have long since overgrown/Our wooden forts became the forest floor/Adventures don't occur here anymore-/Our sacred places have been overthrown." The Speaker believes that urban encroachment, environmental change, and even the passage of time has violated his sacred space.

Some of the strongest emotions in the book are often the saddest. In his poem, "Grief", Burd reveals what happens to a person when another person close to them is going through a death. The Speaker's neighbor has suffered a death. The Speaker gives as much empathy as he can, but knows that he cannot feel what his friend feels. He is consumed by his friend's sadness and tries to put himself in the other's shoes. Burd wrote, "Those most involved can't simply walk away/Their lives have changed forever from now on-/Those who remain defined by who is gone/Those gone defined by who is forced to stay/They greet the ones who come to say goodbye/And smile when all they want to do is cry/Their well of anguish can never run dry/Replenished by the next in line to die." Being an observer to the grief and not actually in the family going through the loss, the Speaker feels separated from his friend by emotions to which he doesn't have full access.

Burd also captures humor in his work. In his poem "Lost," the Speaker is lost driving down a logging road with a less-than-helpful GPS. The Speaker is anxiously imagining the worst possibilities. "My compact car was never meant for this/How soon until they locate my remains?/My legacy will be my lack of brains/And absence in the lives of those I'll miss." However, the Speaker finds his way out of the woods "just before the fear sets in for good." The Speaker realizes that the imagined fear is often worse than the real situation.

Sometimes the poems give meaning to an object. In "The Suitcase", an abandoned suitcase lies on the ground, a testament to its former owner's travels and lifestyles. When the original owner died, the suitcase was left behind. "What irony! A suitcase left behind/Speaks more about the trip it never made/Found useless for the task it was designed/When owner passed from substance into shade" When that owner took their final trip into the Afterlife, it left the suitcase behind. Burd wrote, "Things that matter now won't matter then/The cycle only ends to start again."

Burd describes nature settings in a lyrical manner capturing the various senses. The poem, "Blue Spacious Skies" does this. Burd wrote "Blue spacious skies meet greener pastures' hue/Where sleepy woodland creatures rendezvous/The fragrances of lilac and of fir/Are pungent in the air and would confer/A feeling of tranquility on you." Burd uses this beautiful image to remind the Reader that when they feel disappointment, that there is still great beauty in the world.

The final poems in the book reflect on death and loss. The final poem, "Forgotten" takes place in a cemetery. The Speaker sees an abandoned gravestone that is cracked and not cared for. He contrasts this headstone with the others, more recently tended for ones. He realizes that all people will end up the same way. Burd wrote "Few living souls know whose remains are there/Not even their descendants really care." Eventually, the people in the deceased's lives will die and the headstones will be all that is left.

Memoirs of a Witness Tree features poems that create word pictures of many of the most beautiful, emotional, important, and meaningful life experiences.


Posted by Julie Sara Porter Bookworm Reviews at 9:53 AM