First I want to apologize for being late with this review. I had Covid vaccine #1 and it drained me for a couple of days as well as left my arm bruised. Well I did my bit and will do so again on June 9.

Now on with the review.

As I said this has been quite the time for Epic Fantasies. I am currently reading or reviewing a total of seven Epic Fantasies. We started off with Gol Legend of Ansu by J.W. Webb, a dark bleak fantasy set in a fictional universe with two lovers who go on separate personal journeys and live in a world that regardless of whether they defeated the Big Bad or not they still have to move on to another world.

Well Epic Fantasy Series #2 is The Last of the Gifted by Marie Powell and is a less imaginative setting. It is set in 13th century Wales and borrows some of its plot from history. It is set during the war between the English King Edward de Longshanks and the Welsh Prince Llywelyn ap Gruffydd during the deaths of both the prince in battle and his wife, Elinor de Montfort in childbirth right when Wales was left in chaos, war, and panic over who would rule in Llywelyn's stead. His only child was his newborn daughter. The heir ended up being Dafydd, Llywelyn's younger brother who was executed by being drawn and quartered. Ultimately, Wales was conquered by Edward de Longshanks and his son Edward II became the first English Prince of Wales.

This was a tense stressful time in Welsh history in which the wrong move could have spelled chaos for generations to come. Powell's version of these events do not cover only history but fantasy that comes in the form of two young siblings who have very unusual gifts that they use to aid their country in its time of need.

Hwy is the son of one of Llywelyn's strongest supporters. Hwy  possesses a unique ability. He can see through the eyes of animals, particularly birds. He astral travels and shares consciousness with the animals and is able to retain their senses. He is sometimes used to fly overhead and spy on enemy territory. Hwy inherited this strange ability from his maternal uncle, Gawain, and seems to hearken back to the old Pagan ways. Because of this pre-Christian connection, Hwy is cautioned to keep his abilities a secret. Only a select few, like his immediate family and a few friends and allies know.

That isn't the only ability that Hwy possesses. He discovers this just after Llywelyn is killed. The Welsh prince's spirit leaves his body but doesn't get very far. In fact, it enters Hwy's mind. Hwy communicates telepathically with a prince who is determined to lead his army and defeat his enemy while trapped in the body of a teenage boy.

Meanwhile, Hwy's sister Cat discovers that she has some abilities as well. She can scry, see images of the future through water. Both Hwy and Cat find that their abilities put them at the forefront of this war and right into certain danger.

Spirit Sight is good on both a fantastic and realistic level. Cat and Hwy's abilities are explored with all of their benefits and discomforts. There are some lovely passages that describe how Hwy views the world through an animal's eyes. They describe him flying overhead and looking down on the human world with a sense of detachment.

However, there are concerns with this ability. For example if someone attacks the animal body would that affect him? Can Hwy shapeshift into the animal and if he could what if he loses sight of being human?

His contact with the spirit world is a new development and it is barely known before Llywelyn's spirit hitches a ride inside Hwy's mind. Naturally, both of them are confused and terrified. ("Will you sell me to the Tywlyth Teg next?" Llywelyn sarcastically asks, referring to the Welsh fairies.) The prince also has to contemplate whether his spirit remains for vengeance or to help his kingdom move forward in his absence. There are many chapters where the prince is forced to direct traffic from inside this young man by telling him where to go and give insider information about whether allies can be trusted or not. It appears that Hwy's abilities increase during this stressful time perhaps as a reaction to defend the Welsh kingdom from invaders.

Hwy isn't the only one who is exploring their abilities to the fullest during this time of great need. Cat is given terrifying visions of the future that she barely understands but proves useful for predictions in battle. Sometimes she can't see the full picture leaving her visions to speculation at times. For example, she sees someone falling in a field but is uncertain whether they actually died or survived and were just injured leaving open the possibility that fate can be postponed or even cheated.

Cat's abilities aren't explored as fully in this volume as they are in the next book, Water Sight. However, there is an interesting conversation that she has with her betrothed, Rhys in which he questions whether she is destined to stay unmarried and untouched so she can continue her abilities or get married and potentially lose them.

Besides the fantasy, there are some real world conflicts that show the constant stress of living in a land torn apart by war. Hwy, Cat, and their friends and family are constantly on the run, taking sanctuary with potential allies and friendly kingdoms. Cat spends a lot of the book helping her mother look after the infant princess. There is great tension when she or one of her household flees with a babe in arms.

Hwy was raised and trained in an English household and worries about the possibility of facing his closest friend, James, in battle. (Further complicating things, James also knows about his abilities.)

Sometimes the only way that Hwy knows whether someone is friend or foe is by his animal sight or through Llywelyn's words. Not everyone is that lucky and they pay for trusting the wrong people. There are many lords that will turn their coats and some that play both sides, like one that will take Welsh prisoners but then treats them kindly. Then there is Dafydd, who Llywelyn wonders if his competitiveness with his brother and inexperience could lead to Wales' undoing.

This is a stressful situation and is felt by all the characters and their actions. This is not some mythological evil that they are up against. The English soldiers are a real army that history shows ultimately defeats them. There is a strong sense of fatalism that no matter what they do, they are only postponing what is inevitable. When an army loses the war, sometimes there is very little that can be done except pick up what remains and move on, no matter what supernatural abilities that you possess.

Spirit Sight is a great blend of Fantasy and History that tells a great story. Like the stories of King Arthur, the fantasy inserted into the history gives us a perspective of what the people were like, what they believed, and what they looked to for protection and guidance in a changing world. 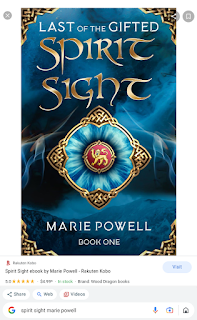