New Book Alert: Court of the Grandchildren by Michael Muntisiov and Greg Finlayson; Somber Warning About The Future World The Next Generations Will Inherit 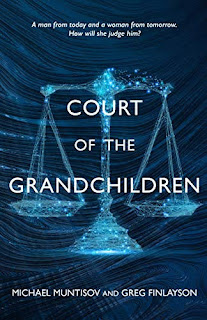 New Book Alert: Court of the Grandchildren by Michael Muntisiov and Greg Finlayson; Somber Warning About The Future World The Next Generations Will Inherit

Spoilers: While reading Michael Muntisiov and Gregory Finlayson's Science Fiction novel, Court of the Grandchildren, I was reminded of the proverb, originally attributed to environmental activist, Wendell Berry, "We do not inherit the Earth from our ancestors, we only borrow it for our children." I am also reminded of Greta Thunberg, the young climate activist and Nobel Peace Prize Nominee, addressing the world leaders at the UN Climate Action Summit with the passion of her youth but the wisdom of someone twice her age with: "How dare you? You have stolen my dreams and my childhood with your empty words! And yet I am one of the lucky ones! People are suffering! People are dying! Entire ecosystems are collapsing! We are in the beginning of a mass extinction, and all you can talk about is money and fairy tales of eternal economic growth! How dare you?"

As older generations, we have to take into account the world that we have destroyed either on purpose for corporate gain or accidentally through apathy and inaction, the world that future generations will inherit. According to NASA's Global Climate Change Website, the global temperature has increased by 2.12 degrees with most of the increase occurring in the last 40 years. This causes rising sea levels, decreased snow cover and shorter winters, shrinking ice sheets and glacial retreat, declining Arctic seas, ocean acidification, and extreme weather patterns like hurricanes, tornados, floods, drought, blizzards, and famine. This is the world future generations will be given and may worsen.

This is also the world envisioned by Muntisiov and Finlayson in their novel. It is only set in a few short decades in 2059. This is a world where a massive flood caused by increased sea levels and inadequate protection occurred. The results were that many of the coastal states were destroyed or declared uninhabitable.

New states are formed in the absence of old ones. Because people haven't learned anything about welcoming asylum seekers, the constitution limits entry of out of state residents into one of the states, Concord. Of course, these former residents are taunted and threatened by locals that complain about sharing resources and employment with out of staters.

The environment is on the precipice of destruction and extinction of the human race is happening. To make up for the lack of human workers, artificial intelligence is on the rise. Some anti technology zealots have joined a group called Humans First. Younger generations have turned violent against the elders because of the state of the world that they have been left with by calling them "burners" and attacking them. (Forget, "Okay boomer." The term "burner" carries much deadlier connotations.) Death and loss are so common that the Euthenasia Law is enacted so people can acquire the right to commit suicide.

In this world, 96 year old David Moreland is at a loss. He is ordered to appear before the Climate Court because he is charged for being one of the people who caused the massive floods that destroyed the bicoastal states. He is guilty about the devastation but has also appealed to the court and reunited with his great niece, Lily for one reason: he wants to acquire the right to die.

This book is extremely dour and dark with a bleak future projected. However, there is a sense of detachment and world weariness within the writing. It alternates between David and Lily's points of view with transcripts from David's trial and memoranda provided by the Climate Court, police, and Presidential candidates. The overall effect is that the Reader is experiencing David's trial as though it were a real event.

We are only getting parts of the information without providing an emotional investment. This is one of those books where the authors don't have to resort to melodrama or cheap gimmicks to appeal to emotion. The situation is sad enough to imagine the destruction of various beaches, coastlines, and once vastly populated cities, and the deaths of millions of people. It doesn't need theatrics, it just needs to report the events.

David and his great niece Lily reflect the generation gap that is inflicted in this book. David is grouchy, witty, and argumentative. He fights not only with Lilly but Sarah, his AI housekeeper, and everyone else unfortunate enough to be caught near him. However, he is a man who is using his snark and foul temper to hide the hurt that is inside. He knows that he is responsible for much of the blame and suffering that has  incurred including personal losses of his own.

Lily on the other hand represents the younger generation, the one that has to live and work in the environment that her forebears created. She does not have the luxury of wanting to die so she has to push herself forward. Even though she just met David, she feels responsible for him since they both lost various family members. She realizes that granting permission for his death is a difficult request and has to weigh the consequences on allowing someone to die because by all intents and purposes, he is guilty for the deaths of many or letting him live because he is about the only family that he has.

One of the more heartbreaking moments occurs when David finally reveals what happened at the disaster that killed his family and was instrumental in the mass flooding. It becomes sadder when it is revealed that it was caused not by a slow natural progression from climate change but by human means, corporate greed, and human desire for cheap and easy rather than safe and energy efficient.

We see this loss that has surrounded David and understand why he feels that he can't live with these ghosts any longer.

Court of the Grandchildren is a dark book that makes us look at the consequences of our actions of the past and present. We can look at what we have caused and declare us, all of us, guilty.