New Author/Book Alert: World Shaken: Guardians of the Zodiac by J.J. Excelsior; First Book Looks To Be The Start of A Great Series 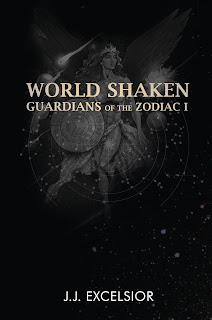 New Author/Book Alert: World Shaken: Guardians of the Zodiac by J.J. Excelsior; First Book Looks To Be The Start of A Great Series


One of the perks that I have in being a freelance Editor/Proofreader/Review is being there when a new book or author is discovered. It is amazing being at the forefront of the creation of something that hopefully will be read and loved by many. I had that feeling with Jordan Frost’s The Midori Chronicles. I have that again reading World Shaken: Guardians of the Zodiac by J.J. Excelsior. This has the potential to become a great graphic novel or animated series and it would be thrilling if it did. This book is a beautifully illustrated and intrinsically plotted story which seems partly a tribute to the old pulp novels of the Golden Age of Science Fiction and partly has the strong characterization of post-modern science fiction.


Something weird is happening to the various planets and bodies in our solar system of the Milky Way Galaxy. Each area seems to be in the grip of some disaster whether by natural, biological, or psychological means and no one knows what's going on. The seas of the water planet, Neptune have become polluted with oil and are deadly. Even though Pluto has an artificial sun for warmth, its temperatures are plummeting below freezing. Volcanoes are erupting and ash is raining down on Mercury. The Sun is diminishing. The residents of the Moon are in civil war. A plague is affecting Jupiter's citizens. The rings of Saturn are missing and the people are succumbing to insanity. There are floods on Mars, earthquakes on Venus, and twisters on Uranus. (There is no mention of how Earth is affected. It may not be a part of this book or Earth’s status may be saved for a later book.) It's not a pretty sight.


While their worlds are afflicted with problems, the Guardians meet and try to find the solutions and to find out what is wrong with them. The biggest problems however are not outside their worlds. The biggest problems are within the Guardians themselves. Even though they are a strong-willed powerful bunch who are clearly worried about their individual worlds and their people (of course showing it in various degrees), they don't get along with each other. Most meetings usually end in a physical, verbal, or magical smack-down between two or more Guardians. No wonder Namur calls them out later by declaring that they can't talk to each other without arguing, let alone find solutions to save their worlds.


We, the Readers, learn the cause of the problems and it's the Guardians themselves or so it seems. Celeste, a Goddess-like being who rules over the Guardians created these disasters. In a Job-like fashion, she hopes that the troubles would bring the Milky Way Guardians together to put their egos aside and unite to protect their worlds. No such luck. Not only do the Guardians have to struggle with each other, but Celeste also has to deal with the Man of Fire, another God-like being who has his own posse of astrological guardians that he wants to put in the Milky Way Guardian's places.


Excelsior is a brilliant new voice in the world of science fiction. Both her words and her illustrations show this. The book’s illustrations are detailed in a black and white graphic style. She draws various action oriented beings in dramatic poses such as Xenobia struggling to protect her people in Neptune's pollution infested waters. Another gripping illustration shows an irate and suspicious Santrista attacking Namur after she discovers Gia, the former Highest Aquarius, is missing.

The heroes pictured are thankfully not all white males. Excelsior portrays the Guardians as various ethnicities, sexualities, and races. She also shows many strong female characters in active roles fighting enemies and defending their home worlds as do the male characters. If this series ever does take off, it will be a boon for fans of all genders, races, and sexualities to find characters to identify with.


Excelsior's illustrations show heroic figures doing brave things like characters from those old pulp novels who wake up thinking of nothing but their next adventure and how to save their worlds. However, the dichotomy between what the characters look like and who they are is very different. Instead of God and Goddess-like too- good-to-be-true Heroes and Heroines, Excelsior's writing shows that these are characters with hang-ups, insecurities, and egos of their own.


Excelsior shows that she knows a lot about the astrological signs by featuring characters that behave according to the personality traits that correspond with their sign. This makes for a fascinating multi-faceted bunch but a group that can easily turn on each other and one that will take a miracle to function as a team. When you have a quick-tempered and impulsive Aries like Santrista, a sociable but vain Libra like Nefsunsi, the logical but modest Virgo, Azare, and the fatalistic manipulative Capricorn, Saturn, among others, it's no wonder that these characters don't get along.


By far the two best Guardians are Xenobia and Namur. As the Highest Pisces, Xenobia is very intuitive and compassionate towards her people. She clearly longs to protect them and heal the waters to her beloved planet. However, she can also see the bigger picture of the suffering other worlds and begins the process of bringing the 12 Guardians together. She is willing to challenge the others’ isolationism to form a real team.


While Xenobia illustrates the best behavior in an experienced Guardian, Namur illustrates the struggles of a newly made Guardian. His former mistress, Gia died and he is left with the struggles of a planet ravaged by twisters and filled with terrified people (including his precocious younger sister), the grief of losing his mentor, lover, and childhood friend, and deciding to join a group whose members can't stand each other. While Gia showed her Aquarian streak by becoming so concerned on a humanitarian level for her people that she was driven to despair, Namur also reflects the character of Aquarius. He is an outsider from the Guardians because his newly named status and shows his independent and rebellious nature by refusing to join the team.


The book is very open-ended as the characters take virtual and psychic journeys to each other's worlds to get a close look at the disasters. It leaves the Reader excited for more as does the introductions of Man of Fire’s Guardians who are more interchangeable and not nearly defined as the Milky Way Guardians. It doesn't help that all their first names start with “Z”. (The only one we get to know somewhat is Zahina, an Aquarius who bonds with Namur's sister, Aurora and befriends Namur.)


These plot angles of the virtual psychic trips into the worlds and the arrival of the other Guardians provide the book’s climax and leaves the Reader waiting impatiently for the next interplanetary journey. If the first book is any indication, it should be a brilliant and exciting one indeed.
Julie Sara Porter Bookworm Reviews at 5:15 AM
Share